The Best Fursuit Foams To Make The Base Of Your Fursuit 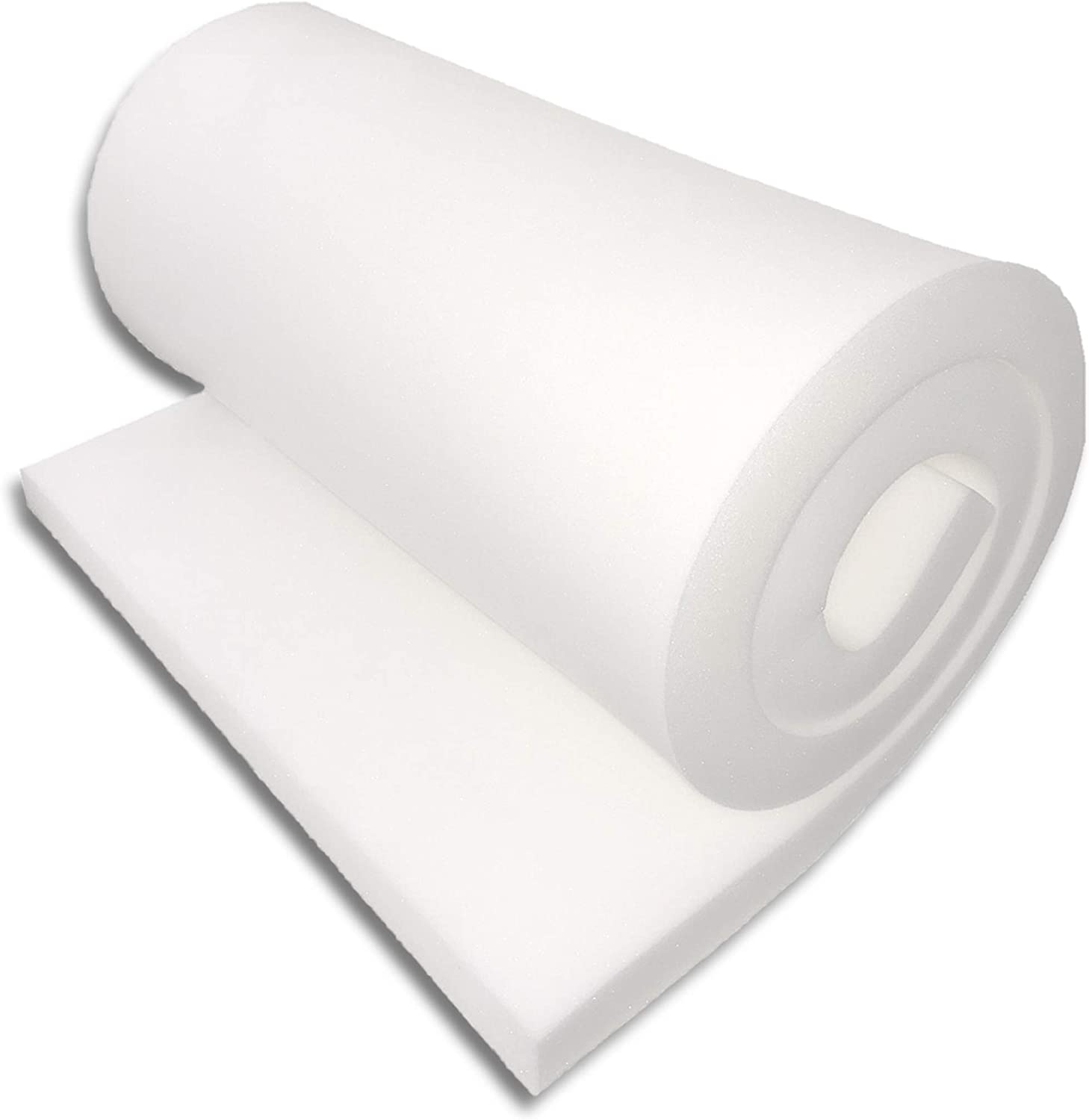 Fursuits are a popular form of costume that allows people to express their creativity and bring their favorite animal characters to life. They have seen a lot more coverage in the last decade as the fandom has only grown and as a result, more people are making fursuits. One of the key components of any fursuit is the foam, which is used to shape and structure the various parts of the suit, such as the head, paws, and tail, so today we are going to cover the best foams to use when making your very own fursuit.

There are several different types of foam that can be used for fursuits, each with its own unique properties and characteristics. Some of the most popular options include EVA foam, polyurethane foam, and memory foam.

A Bit More About Fursuits

For those who don’t know, it’s worth mentioning that fursuits are costumes that are designed to look like animals or anthropomorphic animal characters. They are often worn by people who are interested in anthropomorphic animal characters, also known as “furries.” Fursuits can be made to look like a wide variety of animals, from common pets such as dogs and cats, to more exotic creatures like dragons and wolves. The costumes can be made from a variety of materials, including synthetic fur, foam, and other fabrics. Some fursuits include features such as movable jaws, LED lighting, and mechanical parts. Fursuits are often worn to conventions, festivals, and other events where people can celebrate their interest in furries and anthropomorphic animal characters. 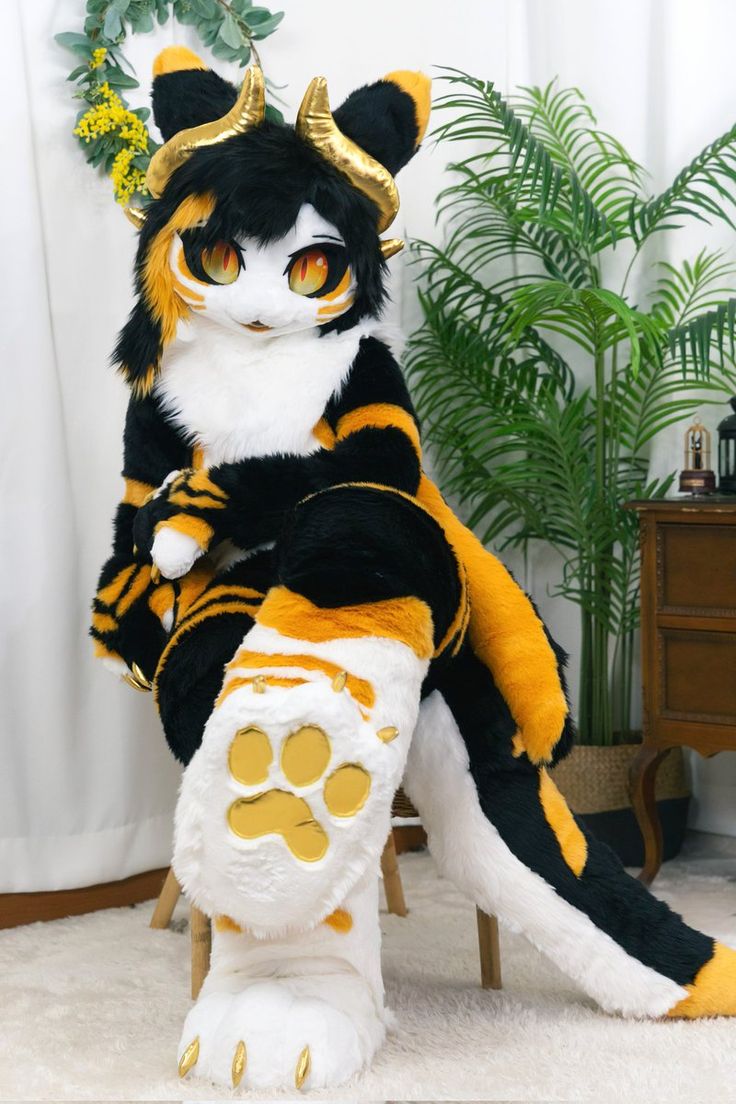 EVA foam, also known as ethylene-vinyl acetate foam, is a soft, lightweight, and flexible material that is often used for the construction of fursuit heads. It is easy to work with and can be cut, shaped, and glued using simple tools and materials. EVA foam is also relatively inexpensive, making it a popular choice for beginners and those on a budget.

Polyurethane foam is another popular option for fursuit construction. It is a denser and more durable foam that is suitable for use in areas of the fursuit that will be subjected to more wear and tear, such as the paws and tail. Polyurethane foam is more expensive than EVA foam, but it is also more resistant to damage and can last longer over time. Memory foam is a type of foam that is known for its ability to conform to the shape of the body and provide support and comfort. It is often used in mattress toppers and pillows, and it can also be used for fursuit construction. Memory foam is more expensive than EVA or polyurethane foam, but it is also very durable and can provide a high level of comfort for the wearer.

When choosing the best foam for your fursuit, it is important to consider your budget, the specific requirements of your project, and the level of comfort and durability that you need. You should also consider the availability of the foam in your area and whether you have the necessary tools and skills to work with it. 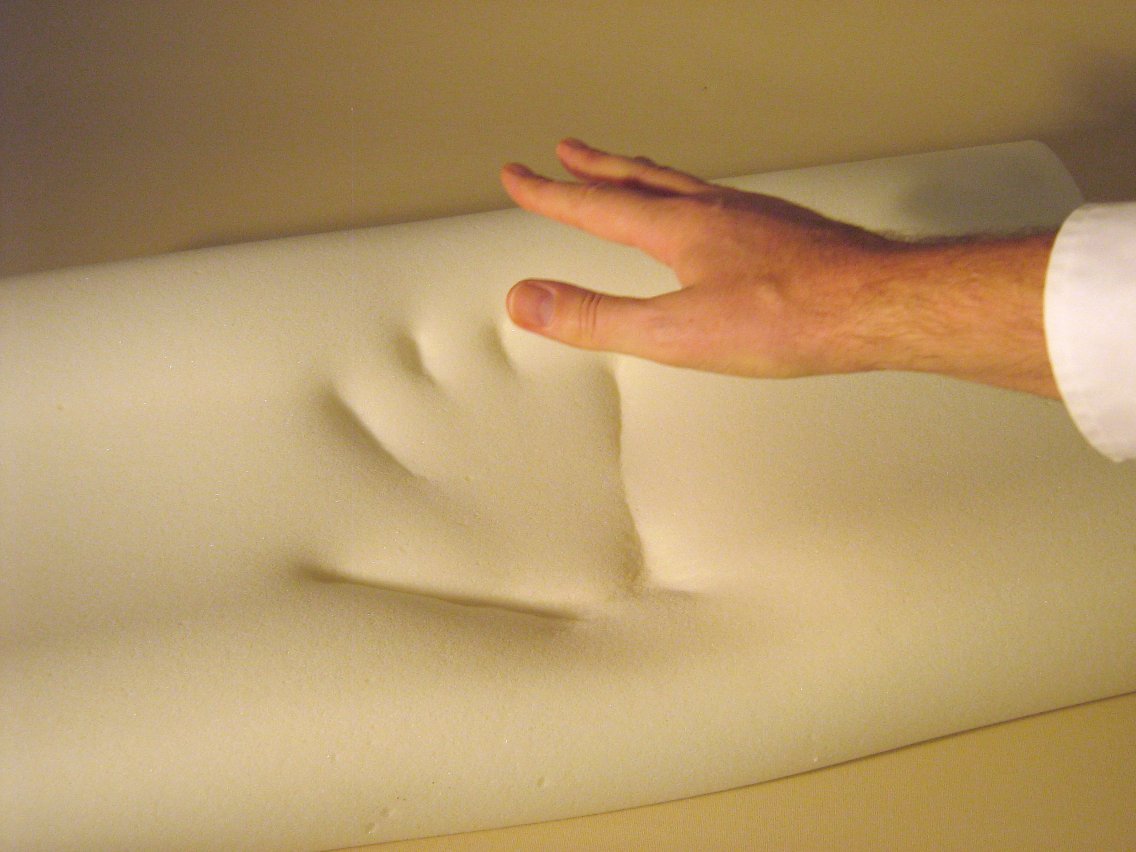 How Thick Should The Foam Base Of My Suit Be?

The thickness of the foam that you use for the base of a fursuit will depend on the specific design and construction of the suit, as well as your personal preferences. Here are a few factors to consider when determining the appropriate foam thickness for your fursuit base:

Support: The foam should be thick enough to provide adequate support for the weight and shape of the fursuit. For example, if you are making a full-body fursuit with a large head and tail, you will need thicker foam to support the extra weight and bulk.

Comfort: The foam should be thick enough to provide a comfortable fit, but not so thick that it is cumbersome to wear. You want the foam to cushion your body and distribute the weight of the suit evenly, but you don’t want it to be so thick that it feels bulky or awkward to move in.

Durability: The foam should be thick enough to withstand wear and tear during use. Thicker foam is generally more durable than thinner foam, but it may also be more difficult to work with and may add more weight to the suit.

In general, a thickness of 2-4 inches (5-10 cm) is a good starting point for the base foam of a fursuit. You may need to adjust this thickness up or down depending on the specific requirements of your suit. 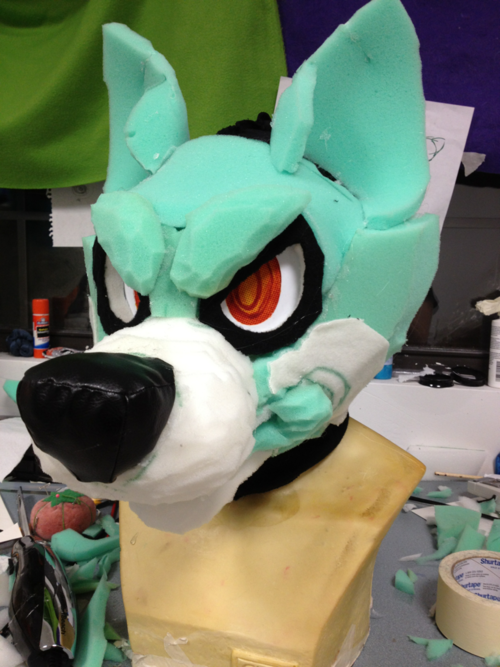 Where Can I Get My Fursuit Foam?

There are many places where you can purchase foam for fursuit making, including online retailers, craft stores, and specialty foam suppliers. Some popular online options include Cosplay Foam and Cosplay Fabrics, while local craft stores such as Michael’s and Jo-Ann Fabric and Craft Stores often carry a selection of foam products. Specialty foam suppliers, such as Foam Mart, may offer a wider range of foam options and may be able to cut the foam to your specific dimensions.

Why Should I Use Foam To Make The Base Of My Fursuit?

Foam is often used as the base for fursuits because it is lightweight, inexpensive, and easy to work with. It can be cut, shaped, and molded into the desired form, and it provides a sturdy foundation for the costume. Foam is also relatively durable and can hold up well under the wear and tear of being worn as a costume.

In addition, foam is a good material for building the structure of a fursuit because it can be used to create a wide range of shapes and sizes. It is also relatively easy to attach other materials, such as fur fabric and other decorative elements, to the foam using various types of adhesives.

Overall, foam is a popular choice for fursuit-making because it is versatile, easy to work with, and provides a strong, lightweight base for the costume. 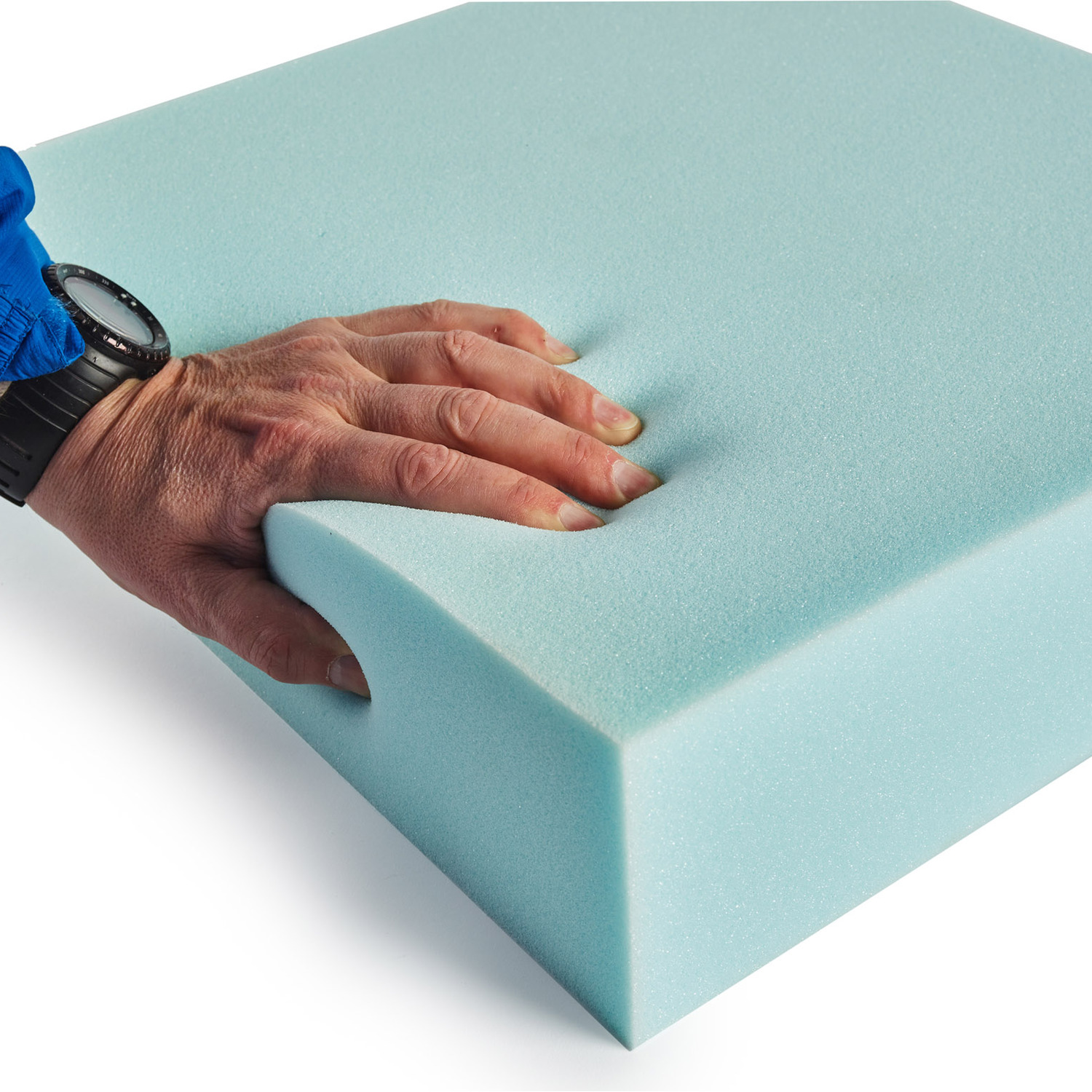 Image via The Range

Are There Any Alternatives To Foam?

Plastic: Plastic can be used to create the structure of a fursuit, and it is often used in combination with foam to provide additional support and rigidity such as in perked-up ears and pointy tails.

Worbla: Worbla is a heat-activated plastic material that can be shaped and molded into a variety of forms. It is often used in fursuit-making to create intricate details and shapes but rarely to make the base of a suit.

Resin: Resin can be used to create hard, rigid structures for fursuits, and it is often used for creating beaks, claws, and other small details.

Cardboard: Cardboard can be used to create a lightweight, inexpensive base for a fursuit, although it is not as durable as foam or other materials.

Ultimately, the best choice of material for a fursuit base will depend on the specific needs and goals of the costume. Foam is a popular choice because it is relatively inexpensive, easy to work with, and provides a strong, lightweight foundation for the costume.

What Should I Wear Under My Fursuit?

It is a good idea to wear comfortable, breathable clothing under your fursuit to help regulate your body temperature and stay comfortable while wearing the costume. Some people like to wear moisture-wicking fabrics, such as athletic shirts and shorts, under their fursuits to help keep them cool and dry. It is also a good idea to wear shoes or sandals that are easy to put on and take off, as you may need to remove your fursuit footwear while wearing the costume. In general, it is best to wear clothing that will not cause irritation or discomfort while wearing the fursuit. Where Can I Buy Fur For My Fursuit?

There are a few options for where you can buy fur for a fursuit and just general supplies for your fursuit:

Online retailers: There are many online retailers that sell fur fabric specifically for fursuit-making. A quick search online should bring up a variety of options.

Fabric stores: Some fabric stores carry fur fabric, and you may be able to find a wider selection in stores that specialize in upholstery or costume-making fabrics.

Specialty stores: There may be stores in your area that specialize in fursuit-making supplies, including fur fabric.

It is a good idea to shop around and compare prices to find the best deal on fur fabric. Make sure to also consider the quality and type of fur that you need for your fursuit, as different types of fur may be better suited for different parts of the costume. What Is The Point Of A Fursuit?

Fursuits are usually worn for entertainment purposes, such as performing in parades or at conventions, or for personal enjoyment. Some people also wear fursuits for social or charitable events, such as fundraisers or community service events.

Fursuits can be a form of artistic expression, and many people enjoy creating and wearing fursuits as a hobby. They can also be a way for people to express their creativity and individuality, and to participate in a vibrant and welcoming community.

Overall, the main purpose of a fursuit is to bring enjoyment and a sense of personal expression to the wearer and to those around them.

In conclusion, there are several different types of foam that can be used for fursuit making, including EVA foam, polyurethane foam, and memory foam. It is important to consider your budget, the specific requirements of your project, and the level of comfort and durability that you need when choosing the best foam for your fursuit. There are many places where you can purchase foam for fursuit making, including online retailers, craft stores, and specialty foam suppliers.

If you’ve ever made a fursona before, then you know just as well as anyone that tying a name to it can be extremely