Protogen Fursuits: Everything You Need To Know - Fursonafy

Protogen Fursuits: Everything You Need To Know What Are Protogen Fursuits?

Protogen fursuits are suits reserved for the protogen species of furries. They are a partly artificial species, being around 40% cyborg and 60% animal, they are a predominantly mammalian species. For the most part you’ll see these in furry art more than you’ll see them in actual fursuits, but protogen fursuits do exist. However, there are a few rules that must be followed when creating a protogen fursona. They must not bear any dinosaur traits / anatomy, they must have biological ears, they must have a short round visor, they must be bipedal and they typically shouldn’t have wings unless they are part of a rare variant.

Protogens are what is known as an open species which means that anyone can make one and as many as they like. This is in contrast to a species like Primagen, which Protogens are a predecessor of, which is a closed species meaning that you can only obtain them by purchasing them from the creator of the species. This is a way of regulating the number of a species in circulation.

These fursuits attempt to capture the intergalactic vibe of the concept art it is based off but this can be hard for obvious reasons. For one, the suit has a mask / visor that is tightly stuck to the face of the fursuit. These aren’t just any masks though, these are masks with lights in them, lights which make up a face that sometimes can even move. They have also been known to have robotic limbs, in the lore, which serve a practical purpose for space exploration such as jet-powered legs or rocket-boosted arms.

Where Can I Get A Protogen Fursuit?

If you’ve done any research at all into getting a protogen fursuit, you’ve probably realized that it is not the easiest task in the world finding a fursuit maker who specializes in protogen fursuits. To make a high-end protogen fursuit, it requires someone who is both competent in the construction of a fursuit and circuitry for the most important bit, the visor. Alternatively, teams of people can work on it together but once again this is hard to find. We’re going to list a few places you can buy suits but the worst thing you could do is get distracted by the flashing lights and bright colors of the first site you see and immediately settle for one before looking into the others. So instead, we recommend browsing through other sites and deciding your favorite. So where do you get one?

Well, to start, Kaiborg Studios have some absolutely stunning work in their portfolio if you’re looking to get any vinyl / epoxy based products outside of protogen fursuits. They’ve done work on several League of Legends cosplays like Project: Kindred (which is technically a protogen lamb fursuit) and have quite a few nonspecific protogen fursuits on their resume including a protogen leaf-nosed bat. These guys are experienced to say the least and it definitely shows in their work, so if you’re willing to put some money down on a suit, give them a look.

If you’re looking for a protogen fursuit made by someone who specializes in making fursuits as opposed to general cosplays, then you should check out Tiko Wolf Protogens. For the most part, their specialty seems to be (as you might’ve been able to guess from the name) wolf fursuits judging by their portfolio. However, one thing that Tiko Wolf makes clear from their home page is that there is a very apparent waiting list for fursuits. As you could imagine, protogen fursuits take longer to make than a standard fursuit because of the circuitry and there’s a whole list of people willing to wait for this service because of it.

However, a lot of protogen fursuit makers don’t have a website and instead carry out their transactions and commissions over sites like Etsy and Furaffinity as an alternative. If you aren’t happy with the aforementioned options, try checking these two out where you can get in touch with a variety of artists

How Much Does A Protogen Fursuit Cost?

Chances are if you’re looking to buy a protogen fursuit you’re already aware that fursuits in general require you to break the bank a little bit if you want a high quality one. So we hope that this eases the blow a little when we say that if you’re looking to get a good protogen fursuit, you’re probably going to be paying upwards of $3000 for a head alone. If this puts you off buying a protogen fursuit you can check this article out for more information about standard fursuits. However, the good news is that the head is typically the most expensive part of protogen fursuits because of the skills and materials required to make them. So in total you’ll probably be paying around $6000 – $7000 for a full protogen fursuit including a body, four paws and a tail. Let’s break down the specifics though for those who are still curious.

Kaiborg Studios pricing for a protogen fursuit head starts at $3165. From there, pricing for a full bodysuit starts at $4900 meaning by the end with the cost of paws accounted for you’ll be looking at a total price of around $7500. Tiko Wolf Protogens on the other hand do not do more than protogen fursuit heads but are considerably cheaper than Kaiborg Studios, with their head pricing starting at $2200. However, extra bits such as the expressions that the LEDs display, LED colors, more fur colors and bigger power banks can bump up this price quite a bit.

As for the sellers on Etsy and Furaffinity, it’s the wild wild west. It’s hard to pin down the pricing to just once price but we found that it averages in the ballpark of $2500 for a protogen fursuit head and around $5000 for a full suit. 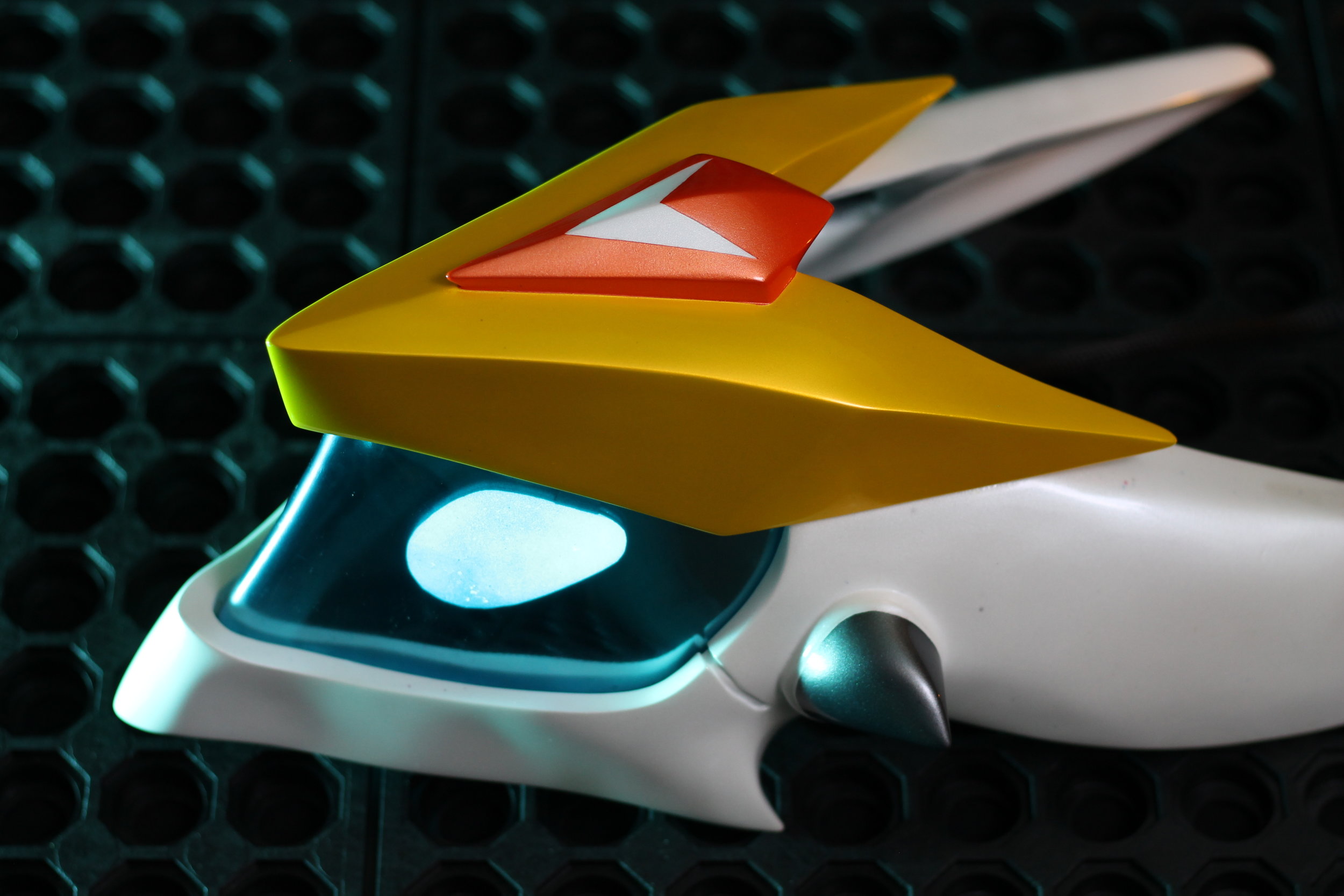 How Long Does It Take To Make A Protogen Fursuit?

Just like with normal fursuit commissions or commissions in general, the amount of time it takes to finish the piece varies from artist to artist. It depends on the nature and complexity of the piece, the amount of people commissioning before you, how accessible the materials are etc. However, that’s not why you came here so we’ll try to give you an average. Considering that a normal fursuit can take around a year to finish, with the extra bits and bobs required to make a protogen fursuit, you will probably be waiting around a year and a half to two years if you’re looking to commission someone to make the suit for you. This will especially be the case if you order from the aforementioned sites as their commissions are often pretty stacked. 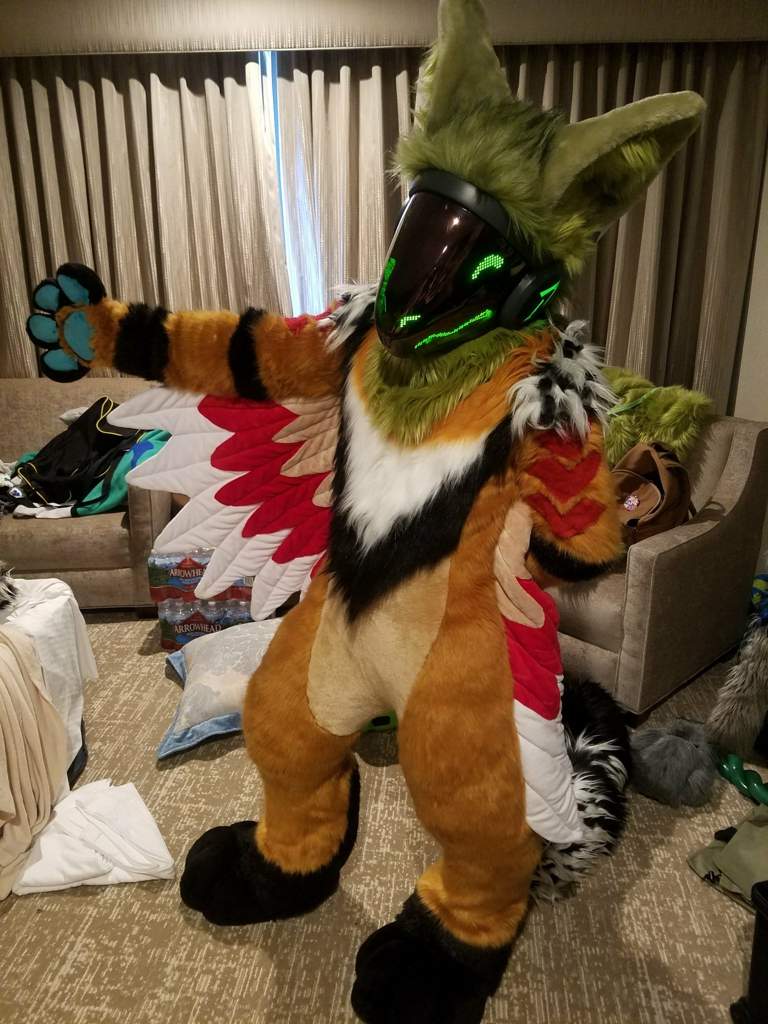 Image by Dr. Wildlife via AminoApps

Can I Make A Protogen Suit Myself?

Of course there is no harm in trying, we’re not going to put our foot down and say “no you shouldn’t make a protogen fursuit yourself” but if what you’re asking is “can I make a professional looking protogen fursuit myself?” then the answer is a possible no. If you’re confident in your abilities with both craftsmanship and circuitry then by all means go ahead and make your dream fursuit. However, logistically, if you aren’t that adept with electronics, it’s unlikely you’ll be able to make a professional looking protogen suit so it might be better to save yourself the expense.